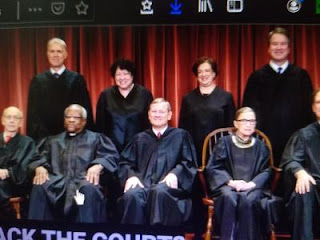 This is the beginning of nasty! Races across the country will become national.

Fox News reports a leading Democrat in the U.S. Senate came out in support of "packing" the U.S. Supreme Court and eliminating the Senate filibuster if Majority Leader Mitch McConnell works to confirm a potential nominee to fill the seat left by Justice Ruth Bader Ginsburg.

Ginsburg died Friday at 87 after a difficult battle with metastatic pancreatic cancer.

Nine justices have served on the nation's highest court since 1869. Before that, the number of justices changed six times, with the maximum number being 10 during the Civil War.

The filibuster is a threshold of 60 votes that's necessary before a piece of legislation is given an up or down vote.

"Mitch McConnell set the precedent," Sen. Ed Markey, D-Mass., wrote from his campaign's Twitter account Friday. "No Supreme Court vacancies filled in an election year. If he violates it, when Democrats control the Senate in the next Congress, we must abolish the filibuster and expand the Supreme Court."