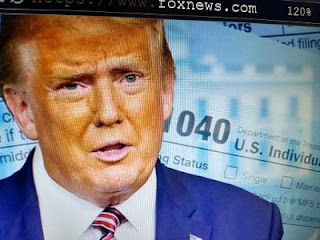 Well, here we go with the New York Times bullshit!

The majority of Americans understand what the New York Times is.  This is nothing but a low down smear of this president.  It won't have any sway with the American people because we've seen this before.  Is this the best the NYT has? I bet the NYT wouldn't sell for more than $5,000 on the open market.

Fox News reports President Trump lambasted a New York Times report that said he paid no federal income taxes for 10 of the past 15 years, calling the story “fake news” and arguing that he paid large federal and state taxes.

“Its fake news, it’s totally made up,” Trump said Sunday during a press briefing less than an hour after the story broke in the newspaper. “Everything was wrong, they are so bad.”

According to the New York Times report, Trump, who has fiercely guarded his tax filings and is the only president in modern times not to make them public, paid $750 in taxes to the federal government the year he was elected and $750 again his first year in office.

The disclosure, which the Times said comes from tax return data extending over two decades, comes at a pivotal moment ahead of the first presidential debate Tuesday and a divisive election.