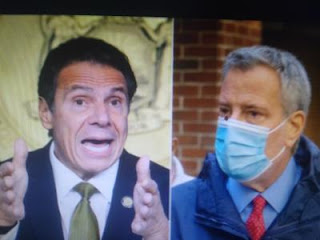 These two idiots are responsible for the crime wave going on in this city.  Gov. Andrew Cuomo is an arrogant clown living off his father's name.  And De Blasio is just another progressive no nothing.

“The Democrats: there’ll be havoc like in New York City,” said Cuomo, mimicking a GOP mailer during a softball interview with radio host Alan Chartock on upstate ­radio station WAMC.

“They ran de Blasio’s picture all over the state!” added the third-term governor. “They’ll turn New York state into New York City, looting and crime and homelessness, law and order!”