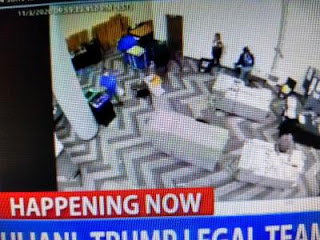 Is AG Bill Barr paying any attention to this?

GatewayPundit reports the Georgia Senate Oversight Committee held a hearing on Thursday on the massive election fraud in the state.

President Trump was ahead of Joe Biden by more than 110,000 votes in Georgia on election night when all of a sudden Fulton County stopped counting ballots after a pipe burst.

Video footage from Georgia shows that poll workers were told to stop counting and leave, while 4 people stayed behind to continue counting ballots in private pic.twitter.com/bEYdFMAvsa