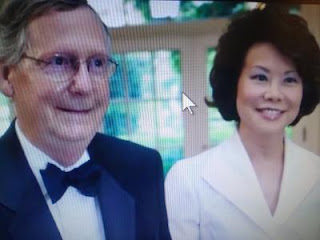 It has been revealed in published reports that Mitch McConnell wife, Elaine Chao owns a shipping company.

That company's biggest client is the Chinese Communist Party.

So McConnell has a direct fi8nancial interest with thre CCP!

Think about that as McConnell is so far going along with the second impeachment of  Donald Trump!