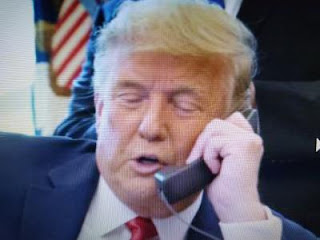 It's reprehensible that GOP officials released this call to the press.

But, that's what Trump has been dealing with since he got elected.  Republicans min DC, swamp creatures, never has his back.

Newsmax reports  the Washington Post on Sunday released audio of a Saturday phone call between President Donald Trump and Georgia Secretary of State Brad Raffensperger in which the two can be heard discussing election results.

The Post initially released snippets of the hour-long call in which Trump can be heard discussing election results with Raffensperger and his lawyer Ryan Germany.

Raffensperger and Germany counter Trump's assertions largely with simple claims that the matters Trump raised have been investigated.