What does the power-sharing agreement between Chuck Schumer and Mitch McConnell really means for the American people Both sides are playing us! 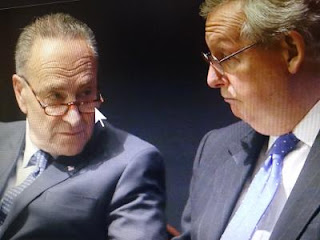 What has to be understood is that both establishments of the Democrat and Republican are two sides of the same coin.

They play politics and what they say to voters and to each other are two very different things.

We were told that Democrats winning both seats in Georgia gave them full control of the Senate.  50 Dems in the Senate plus Kamala Harris voting for the Joe Biden agenda gives them control, right?  In theory it does.

But, along with control of the House, the Senate, and the White House, Democrats don't have anybody to blame but themselves if their policies falls on their face.

Further, the Democrats, if they wanted to, can get rid of the filibuster rule.  However, they're not.  They're keeping it so they can  blame .Republicans Republicans for not getting their agenda passed.

Keeping the filibuster rule in place gives both sides, Dems ands the GOP,  plausible deniability for the upcoming gridlock that suits both sides well.

This is a film example of gridlock.