Schumer and McConnell come to agreement for 50-50 Senate, keeps filibuster rule in place angering progressives who clamor for Medicare for All vote #ForceTheVote 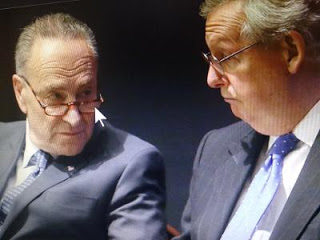 Progressives like Jimmy Dore are besides himself because Democrats have shown their true colors.

The Democrat base wants Medicare for for All and Democrats are not going to put it for a vote.  You're not gonna find this type of analysis on CNN or on Fox.

AOL News reports  in particular, McConnell wanted Schumer to commit that Democrats would not end the legislative filibuster. Getting rid of that procedural tool would make it easier for the new majority to approve President Joe Biden’s agenda on a 51-vote threshold, rather than the 60 votes typically needed to advance bills.

Schumer refused to yield, but two centrist Democrats, Sens. Joe Manchin of West Virginia and Krysten Sinema of Arizona, announced they would prefer to keep the filibuster intact. That essentially denied Schumer the votes needed to change the rules, and McConnell dropped his demands.