Is this the Woke Pageant?: Beauty pageant winner wears Black Lives Matter-inspired dress to raise awareness: 'We can all be equal' 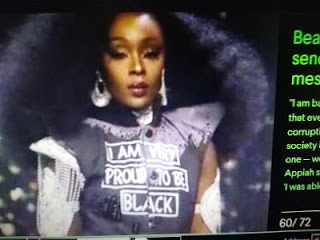 I used to watch beauty pageant  back in the day.

But, when they took out the bikini competition, that drove me out the picture.    What the point In watching anymore?  So I see that a African American woman wins a beauty contest I never heard of before.  But, I don't think this was worth the watch either.

AOL News reports  Abena Appiah, the first African American to represent the United States in the Miss Grand International pageant, recently went head-to-head with 62 other beauty queens. And not only did she win the title on March 27, but she also used the worldwide stage as an opportunity to bring awareness to social justice issues.

One of the ways she did this was through a custom dress worn during the "National Costume" segment of the competition. The gown featured portraits of victims of police brutality such as Breonna Taylor, George Floyd and Akai Garley. "I am basically trying to tell people that even though there's so much corruption and hate crimes in our society if we come together as one — we can all be equal," she shares with Yahoo Life about the meaning behind the look.