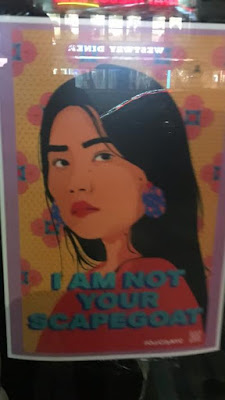 A good friend of mine texted med the above photo he saw in a storefront in Manhattan.  After a few minutes of trying to figure out what the sign meant it hit me.

But, it indeed took me awhile to get my thinking right.  All I saw was a depiction of a beautiful Asian female.

Then I realized whoever put up the sign in Manhattan mostly likely wars a Leftist and then it became clearer.  Leftists think because Covid was created in China that somehow Americans are blaming Asians for it.

However, that is not the case!

I don't blame the Asian people for anything.  In fact, I admire them for what they are achieving in this country.  Look how well their kids are doing in school.  They are kicking Blacks, Latinos, and Whites in the ass academically.  Our kids need to step up their game to match what the Asians are doing in school.  Asians are the largest group entering the most elite high schools in New York by far.  That's something to be applauded and copied.

But, what do Leftists who run these schools want to do?  Remove the entrance test to get into these schools to achieve, wait for it, diversity!  That hurts Asians and it's wrong!

By the way, there's a huge difference between the Chinese people and the government in control of China, the Communist Party of China.  My gripe and millions of others take issue with that communist government, not the people.