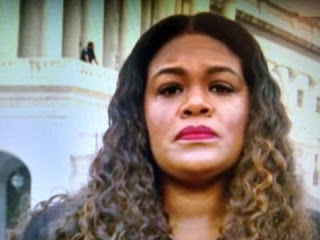 I like to make this a combined post of two stories I'm linking together.  First Cori Bush is a congresswoman from St' Louis  whose extremely stupid.  The other day she admitted to spending money for her own private security while simultaneously pushing for defunding police around the country.  So she's fine to have her own personnel police while stripping away police protection from American citizens.  The second part of the post is a murder that happened on the streets of New York.  Thanks to the Democrats who run New York, 1 billion dollars was defunded from NYPD and crime is running rampant.  This is what progressive-woke policies look like in the real world and this murder caught on video shows it all.

NY Post reports shocking video obtained by The Post shows the moment a woman with a gun walked up to another woman and shot her dead on a crowded Prospect Heights street Tuesday – before casually strolling away.

The video shows a shooter wearing a purse walk up to 42-year-old Delia Johnson and shoot the unsuspecting victim in the head while she was having a conversation with some people sitting on the stoop of a building on Franklin Avenue near Prospect Place.

The shooting happened at about 9:40 p.m., police sources said.