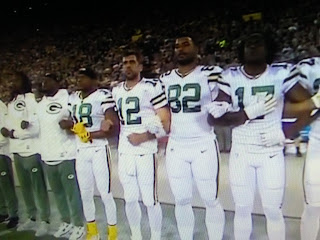 The Packers may have given other NFL teams a way out of the mess the players has put themselves in.
Standing for the anthem is not gonna go over well with the hardcore social justice warriors in the league.  And linking arms will annoy sports fans that don’t want to see a shred of politics in the game.  We'll just have to see what the fallout is.

SB Nation reports rhe Green Bay Packers and some of their fans linked arms on Thursday night prior to their game against the Chicago Bears.

Aaron Rodgers and the Packers lined up on the sideline, arms locked together:

Earlier in the week, Aaron Rodgers made a request that fans join the team.
"This is about equality," Rodgers said Tuesday. "This is about unity and love and growing together as a society and starting a conversation around something that may be a little bit uncomfortable for people.
“But we've got to come together and talk about these things and grow as a community, as a connected group of individuals in our society, and we're going to continue to show love and unity, and this week we're going to ask the fans to join in as well and come together and show people that we can be connected and we can grow together."