Edmonton Terror Attack: Chaos in Canada as cops stabbed by man with ISIS flag and pedestrians ploughed into during terror attack 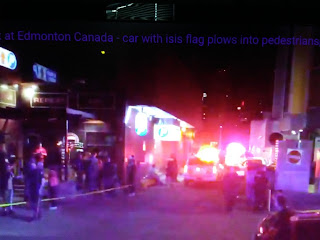 This is a wake up call for Canada!
It doesn't matter how accommodating they are as a country.  They are part of The West and thus hated by Muslim terrorists groups.   ​

The Sun reports emergency services​ rush the scene as an Police Service officer was injured near the Commonwealth Stadium, in Edmonton, Canada
He then jumped out the car and knifed the cop "several times" and fled on foot as a dramatic manhunt was launched.
Police chased down the attacker as he drove through the packed out streets in downtown Edmonton.
He then ploughed into four pedestrians leaving them with multiple injuries before he was arrested after flipping the van on to its side.
Edmonton Police Chief Rod Knecht said the incidents are being investigated “as an act of terror” and that the attacker acted alone.