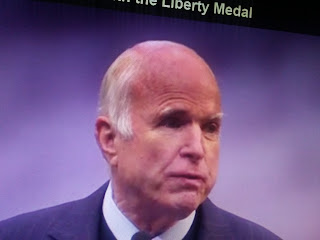 Sen. John McCain still around?
This guy has done more damage to the country  than good and is shameful that he loves the attention of a thoroughly corrupt media.


Daily Mail reports Sen. John McCain warned against the US turning toward 'half-baked, spurious nationalism' and jabbed at unnamed pushers of isolationist politics while at an event honoring the war hero's contributions.

The six-term Republican senator from Arizona made the remarks at his National Constitution Center Liberty Medal ceremony in Philadelphia after receiving the award for a lifetime of service and sacrifice to the country.

In addition to recalling his more than two decades of Navy service and his imprisonment in a Vietnam prisoner of war camp, McCain took a moment to go a step further than the night's other speakers, who lamented what many described as a fractured political climate.