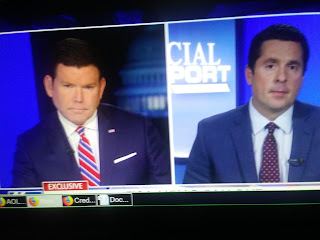 All Americans should watch this interview to find out the truth they are not getting from CBS, ABC, NBC, CNN, MSNBC, the New York Times and the Washington Post.
But, that's not gonna happen because the corrupt media machine has people hoodwinked into thinking they are legit journalists.  They are not!  They're operatives for the Democrat Party masquerading as journalists and it is that what makes the corruption at the FBI and the DOJ possible.

Fox News reports House Intelligence Committee Chairman Devin Nunes, R-Calif., told Fox News on Friday that the memo alleging intelligence abuse during an investigation into the 2016 presidential campaign was released out of “an obligation to the American people.” He also said there's “damning” evidence that the courts were misled in an attempt to surveil a Trump campaign member.

Appearing on “Special Report,” Nunes told Fox News’ Bret Baier that the motivation behind releasing the memo was protecting the rights of American citizens

“I have an obligation to the American people when we see FISA abuse," Nunes said. "These are secret courts that exist to target for foreigners, for catching terrorists, for catching people who might be bad actors and the American citizens that are represented before this court have to be protected, and the only place that can protect them is the U.S. Congress when abuses do occur.”