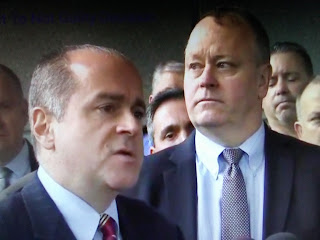 This was the case that put Police Commissioner James O'Neil on my personal shit list for failing tosupport his own after the fatal shooting of bat wielding Bronx woman.
He threw Sergeant  Hugh Barry to the wolves is a rush to judgment for racial politics.

NY Post report the NYPD sergeant on trial for the fatal shooting of a bat-wielding Bronx woman has been found not guilty in the woman’s death, a judge ruled Thursday morning.

“Clearly this case involved a terrible tragedy and emotions on both sites are elevated,” Neary said, before declaring that Barry was found not guilty of second-degree murder, first and second degree manslaughter or criminally negligent homicide.