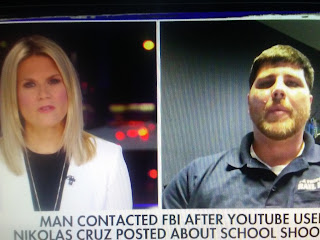 What's the point of the FBI again if they can't handle this kind of situation to prevent mass murder?
But, maybe investigating Trump Russia collusion took more of their time?

Fox News reports an FBI official on Thursday confirmed the bureau received a tip months before the Florida high school massacre about a disturbing YouTube comment by a user named "Nikolas Cruz": "I'm going to be a professional school shooter."

Special Agent Rob Lasky, in charge of the FBI’s Miami division, confirmed during a Thursday morning news conference the agency
investigated a comment made on a YouTube video in September that matched the remark reported by vlogger Ben Bennight.

After conducting database reviews, however, the FBI said it could not identify the user who made the comment, according to Lasky. He also said that there was no connection found to South Florida.

Nikolas Cruz, a 19-year-old former student at Marjory Stoneman Douglas High School, is accused of killing 17 people in one of the nation's deadliest school shootings.