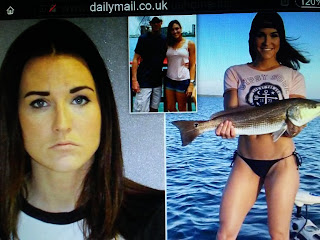 What a Slut!  14 years old?  This is pedophilia!  It's been awhile since I've done a post like this.

Daily Mail reports a married middle school science teacher has been arrested for allegedly conducting a sexual relationship with a 14-year-old male student.

Stephanie Peterson, 26, was arrested in Wednesday morning in New Smyrna, Florida after the boy allegedly confided in his parents.

The 8th grader told them that Peterson, whose married name is Ferri, picked him up occasionally from their home at 11pm and often spent hours with him in private afterwards.
He also said that she sent him nude photographs of herself and that she had bought him marijuana and a 'bowl to smoke it'.