Trump Wants Suspensions for NFL Players Who Kneel During Anthem 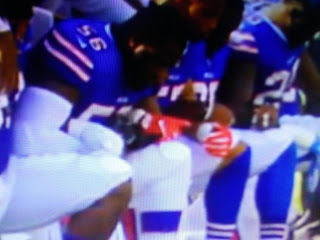 No sports league has handled a labor issue more stupidly than the NFL.
Instead of enforcing their own rule that mandates players stand for the national anthem, they let the inmates run the asylum.

NewsMax reports U.S. President Donald Trump said on Friday that National Football League (NFL) players who do not stand for the national anthem should be suspended for the season without pay.

The comments come a day after the NFL and the union representing its players said they were working on a resolution to the league’s national anthem policy.

The NFL National Anthem Debate is alive and well again - can’t believe it! Isn’t it in contract that players must stand at attention, hand on heart? The $40,000,000 Commissioner must now make a stand. First time kneeling, out for game. Second time kneeling, out for season/no pay!
— Donald J. Trump (@realDonaldTrump) July 20, 2018