A's catcher Bruce Maxwell slams Trump for promoting prejudice: All he knows is 'life on a silver platter' 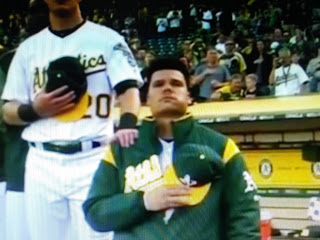 This catcher for the Oakland A's doesn't know anything about Donald Trump other than Democrat talking points.
He's need to stick to calling pitches and leave the politics to people who know better.

The Score reports  Oakland Athletics catcher Bruce Maxwell provided further insight on his beliefs that led to his decision to kneel during the national anthem Saturday, citing President Donald Trump's lack of compassion towards people of color.
"I was talking to my dad about this. Our fearless leader right now is expressing that it's OK to judge people by the color of their skin. It's OK to separate people by their differences. That's not OK," Maxwell told Jeff Passan of Yahoo Sports.
"There's not been one time Trump has tried to sit in our seat. He grew up in a bubble, a golden bubble. He's never tried to reach out and understand where African-Americans and Hispanics and Muslims are coming from. All he knows is what he's experienced, and that's life on a silver platter. That's a big thing for me."
Maxwell, who comes from a military family, will continue to kneel during anthems, saying if "things don't really change" his protest will continue into next season, as well.