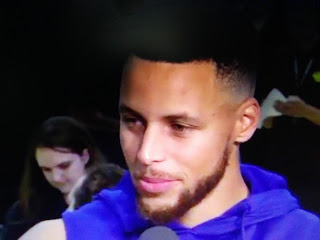 Stephen Curry and some fellow teammates thought they could make a political statement and embarrasses President Trump by refusing to go to the White House as is the tradition for championship winning teams.
However, Trump refusing to be upstaged by a basketball player, takes back Stephen Curry's invitation.  Exactly as I would've done if I were president.

The NBA champion Warriors were reportedly planning to meet as a team and decide whether to go to the White House, per tradition, due to their dislike of Trump.

"Going to the White House is considered a great honor for a championship team," Trump tweeted. "Stephen Curry is hesitating,therefore invitation is withdrawn!"


Ballplayers better wise up because fans are not interested in their political opinions.  They want to escape life by just tuning out for a few hours to watch a game.  But, if these misguided players continue to inject politics into the game, fans will stop coming to the games and stop watching it on TV.