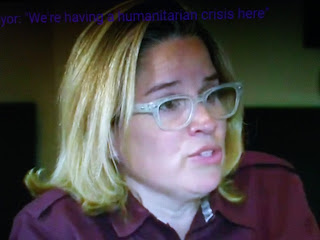 I've seen this movie before!
In the aftermath of Hurricane Katrina, former New Orleans Ray Nagin spent more time complaining about what the Bush administration wasn't doing instead of rolling up his sleeves and doing his job helping his own people and being a source of strength.  Carmen Yulín Cruz is doing the very same thing and it's very unbecoming.  This woman is a terrible leader who is way over her head in dealing with a crisis situation.  San Juan's biggest problem is her!


Politico reports the mayor of San Juan, Puerto Rico, lashed out at acting Secretary of Homeland Security Elaine Duke's comment that the Hurricane Maria relief efforts are a "good-news story," saying, that in reality, it's a "people-are-dying story."

Speaking outside the White House on Thursday, Duke said she is “very satisfied” with efforts to aid Puerto Rico in the wake of Maria, which devastated the island and has created a humanitarian crisis. Duke said, “It is really a good-news story,” an assessment that prompted San Juan Mayor Carmen Yulín Cruz's strong rebuttal.

“Well, maybe from where she's standing, it's a good-news story. When you’re drinking from a creek, it's not a good-news story. When you don't have food for a baby, it's not a good-news story,” Cruz told CNN’s “New Day,” referring to the plight of Puerto Ricans, many of whom have received little or no aid thus far. “When you have to pull people down from their buildings — I'm sorry, but that really upsets me and frustrates me. You know, I would ask her to come down here and visit the towns, and then make a statement like that, which frankly, it is an irresponsible statement.