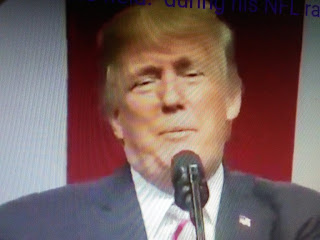 Although President Trump is in Alabama backing the wrong candidate when he should be supporting Judge Roy Moore, this is the reason Trump is so loved and so hated.
He speaks plain from the heart like regular people.  That's why he's great!  He doesn't believe in political correctness and that's exactly what America needs in a president.

Daily Mail reports President Donald Trump has ratcheted up the national controversy over black National Football League players who refuse to stand while that U.S. National Anthem is played before games.
During a Friday night political rally in Alabama, Trump called on fans to boycott teams that allow players to engage in that particular form of protest.
The league's TV ratings have slid since quarterback Colin Kaepernick, then the leader of the San Francisco 49ers, began the trend in September 2016.
'Wouldn't you love to see one of these NFL owners, when somebody disrespects our flag, to say, "Get that son of a b***h off the field right now! He is fired. He's fired!"' Trump boomed.