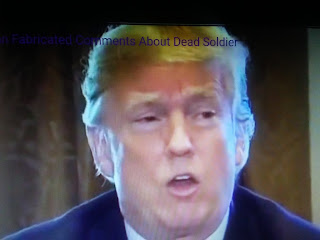 The congresswoman involved has a history of oddball behavior .
This story will fizzle out as fast as it started.

Local 10 reports President Donald Trump said Wednesday morning on Twitter that he never told the widow of U.S. Army Sgt. La David Johnson that the soldier "knew what he signed up for ... but when it happens, it hurts anyway."

"Democrat Congresswoman totally fabricated what I said to the wife of a soldier who died in action (and I have proof)," the tweet said. "Sad!"