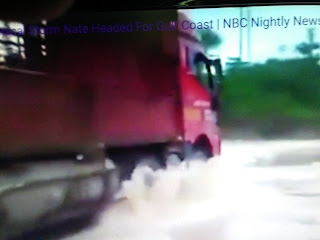 This has been a heck of a hurricane season.
A cat 1 hurricane is not to be taken lightly.  Plenty of damage can still be had.

AOL News reports Hurricane Nate may strengthen on Saturday, threatening to hit the U.S. central Gulf Coast with strong winds and storm surges after it killed at least 25 people in Central America.
New Orleans evacuated some residents from areas outside its levee system as Nate, a Category 1 hurricane, the weakest on a five-category scale used by meteorologists, churned towards the central Gulf of Mexico.
"Nate is at our doorstep or will be soon," New Orleans Mayor Mitch Landrieu said, adding that the winds could cause significant power outages, and storm surges are projected to be six to nine feet (1.8 to 2.7 meters) high.
"We have been through this many, many times. There is no need to panic," Landrieu told a news conference.