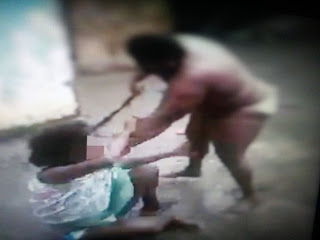 This is a growing story in the Caribbean.
Don't know what the context of this incident is.  However disciplining a child which is sometimes necessary never looks good to outsiders.

Jamaica-Gleaner  reports the St Thomas Police have charged the mother who was caught on video beating her daughter with a machete.

Forty-four-year-old Doreen Dyer of Bath district in the parish was charged this morning with cruelty to a child.
Dyer was offered station bail and is scheduled to appear in court on October 11.
​The video, which has been circulating heavily on social media, shows the partially nude mother beating the girl violently with a machete while cursing expletives.