Though Out of Power, Democrats Are Winning the Fight, Pelosi Says, because Republicans are chumps 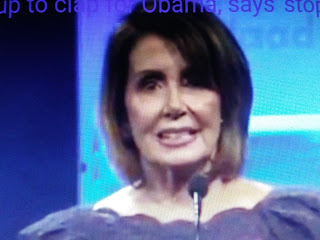 This scene from The Distinguished Gentlemen describes Washington perfectly as to how Washington works!

NY Times reports Representative Nancy Pelosi might have retired from Congress had Hillary Clinton been elected, content that she was leaving the government in capable female hands.

“One of the reasons I stayed here is because I thought Hillary Clinton would win, we’d have a woman president and so there would be a woman not at a seat at the table, but at the head of the table for the world,” said Ms. Pelosi, the liberal Californian and longtime leader of House Democrats.

“We wanted to have a woman president,” she said in an interview for the New York Times podcast “The New Washington.” “But when we didn’t, then I couldn’t walk away and say, O.K., just let all the men have the seats at the table that are making decisions for our country.”