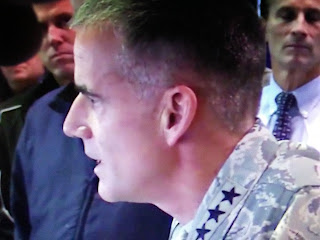 A Black cadet at the Air Force Academy Prep caused a national incident by being dishonest, deceitful and manipulating public opinion for purely political reasons and stoking racial tensions at AFAP.

This is how Lt. Gen. JaySilveria reacted to the revelation:

“Regardless of the circumstances under which those words were written, they were written, and that deserved to be addressed,” Silveria told the Colorado Springs Gazette in an email. “You can never overemphasize the need for a culture of dignity and respect — and those who don’t understand those concepts, aren’t welcome here.”

What about the honor code, Lt. Gen. Silveria?  Doesn't that mean anything?  The cadet in question needs to be called out because he besmirched the reputation of all the cadets there.

The so-called racist slur was a lie!

There wasn't racism involved.  What did happen was loathsome stoking of racial tensions where none existed by a Black cadet race hustler  and that needs to be called out with the same righteous zeal you were manipulated into displaying.
at 11/08/2017 10:16:00 PM