Trump Issues Warning to North Korea: 'Do Not Try Us' 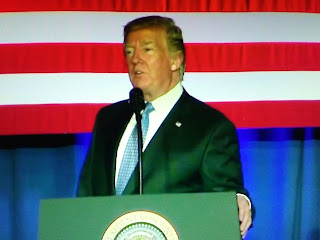 I've said for weeks that Kim Jong Un is all bluster from the beginning.
President Trump has set in stone a simple message: Live or die!  It's up to you.  No other president has ever gotten close to being this forceful with North Korea.


NewsMax reports President Donald Trump issued a stern warning to North Korea and dictator Kim Jong Un on Wednesday in a speech to the South Korean National Assembly: "Do not underestimate us and do not try us."

"The regime has interpreted America's past restraint as weakness," Trump said in Seoul on his second day on the Korean Peninsula. "This would be a fatal miscalculation.
"This is a very different administration than the United States has had in the past.