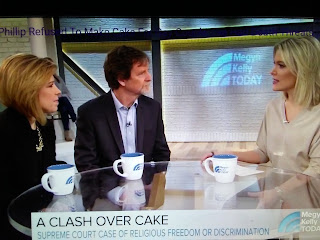 Megyn Kelly can never say that I never came to her defense after ripping her for the past year.

In this case GLAAD is out of line and totally full of crap!  There was nothing wrong with Kelly's interview and going over the facts of the case.  If anything the injustice is how this baker was targeted by radical homosexual activists looking to bring a test court case.  There is no shortage of bakers in the United States willing to service homosexuals.  When these incidents happen it's precisely because homosexuals want to stamp out religion using Gay rights as their blunt instrument!  Olay, GLAAD, we know your game and what's really going on.  That's why you're so ticked off because there's an alternate media that doesn’t kiss up to you!


TooFab reports GLAAD is not happy with Megyn Kelly.
After the "TODAY" host interviewed Jack Philips - the owner of the cake shop who refused his services to same-sex couple - and his Alliance Defending Freedom attorney Kristen Waggoner on Friday, GLADD is both shredding Kelly and demanding air time to challenge the baker's "false narratives."

"Today Megyn Kelly allowed her morning show to be nothing more than a Trojan Horse to push the talking points of a known anti-LGBTQ group, Alliance Defending Freedom, into homes across America," GLADD President and CEO Sarah Kate Ellis said in a statement. "Parents across America tune into talk shows like this for fair and balance presentations of news stories, and nothing about this egregious segment was fair or balanced. Kelly and her producers failed to fact check blatant false narratives about this case and merely extended her Fox News legacy of sitting idly by as anti-LGBTQ agendas are pushed forward."