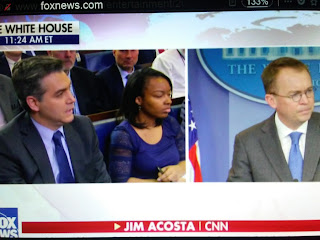 Jim Acosta loves to grandstand for his fellow cohorts that make up the corrupt media.

Fox News reports CNN’s Jim Acosta resumed his role as White House punching bag on Friday when Office of Management and Budget Director Mick Mulvaney shut him down during a briefing on the looming government shutdown.
Acosta asked, “How can it be the Schumer Shutdown when Republicans control the White House, the House and the Senate?”

Acosta timidly acknowledged that he did, in fact, claim to know what Mulvaney was referring to before re-phrasing his question.