Hillary Clinton reads from ‘Fire and Fury' at Grammys 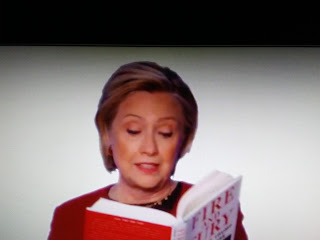 I actually thought this was pretty funny and I kinda knew Hillary was goona show up somewhere in the Grammys.
Snoop was hilarious!

NY Daily News reports even the Grammys snuck in a dig at President Trump.

In a prerecorded video, host James Corden brought in celebrity guests to read from one of the biggest books of the year, Michael Wolff’s tell-all “Fire and Fury.”

On the hunt for a GRAMMY Award of his own, James Corden auditions celebrities for the spoken word version of Michael Wolff's "Fire and Fury." pic.twitter.com/SjTobAbv2N
— JAMES IS HOSTING THE GRAMMYS TONIGHT (@latelateshow) January 29, 2018

Email ThisBlogThis!Share to TwitterShare to FacebookShare to Pinterest
Labels: humor