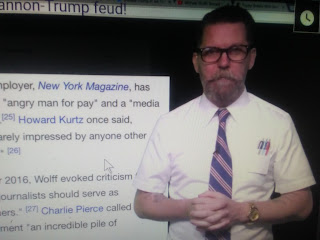 There's nothing about Michael Wolff's sexual orientation online and I see that as a red flag indicating information has been intentionally wiped.
Well, under the laws of physics, for every action there's and equal and opposite reaction.  I gotta a feeling a backlash is coming Wolff's way that might result in his outing.

IOTW Report  reports why can’t Gavin have this theory? It’s as solid as any of the bowel movements Wolff put in his book.

RightWingWatch excerpted Gavin’s rant and  posted it as if they were posting photos at the post office. The gay periodical, The Advocate, also went into convulsions

Email ThisBlogThis!Share to TwitterShare to FacebookShare to Pinterest
Labels: humor