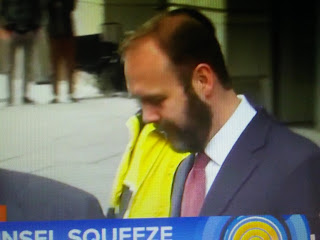 Well, they gotta get some poor schnook.
I guess Mueller has to keep this Kangaroo probe going to pay off the mortgages owed by his staff.  Is anybody looking into that because I can't get help to pay off my loans?

NBC News reports former Trump campaign chief Paul Manafort was hit with new charges on Friday, including an allegation he secretly recruited and funded a group of former European politicians to lobby in the United States on behalf of Ukraine.

The superseding indictment was filed just a couple of hours after Manafort's business partner, former campaign aide Rick Gates, pleaded guilty to conspiracy and lying to investigators — even while he was negotiating a deal with special counsel Robert Mueller.

Gates is now the third associate of President Donald Trump to strike a cooperation agreement with Mueller, who is investigating Russian meddling in the 2016 election and possible ties to the campaign.

The agreement, which requires Gates to cooperate on "all matters" prosecutors deem relevant, appears to be a good deal for both sides. Gates could get as little as probation if he keeps up his end of the bargain, and Mueller's case against Manafort morphs from one built on paper evidence to one in which the star witness worked hand-in-hand with the defendant