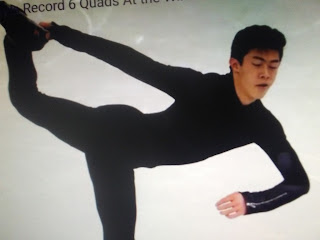 I haven't seen no more than 10 minutes of the Olympics.
The was more juice to it when the USSR and East Germany was in the mix and the U.S. used to battle them.  With the Cold War over, where's the compelling reason to watch?


Deadline reports a week into the PyeongChang Olympics and Team USA currently has nine medals and for a moment it looked like Nathan Chen was poised to add to that roster last night in men’s figure skating.

Coming off an initially weaker than expected performance, the Salt Lake City native put some history on the ice at the XXIII Winter Games in NBC’s primetime as he pulled off a record shatter five clean quadruple jumps and one more with a touch. In the end though, like the efforts of Lindsey Vonn in the women’s super-G ski event, it just weren’t enough to make it the podium.

In an Olympics that is down almost 8% overall from the XXII Winter Games of 2014 and looking to be heading towards an overall low despite its multi-platform efforts, NBC may be feeling a bit like that coming off the first Friday of official competition of the 2018 Games.