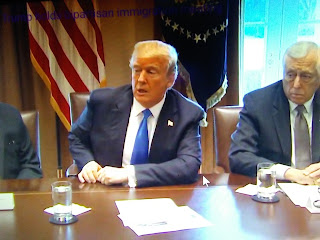 Let's see how this works out which I believe will be in favor of the United States.
For too long other countries having been taking advantage of the U.S. because prior presidents didn't have the skill sets to push back against unfair trade practices.  President Trump intimately knows business because he's from that world.  He's not an academic or a politician who always act like they know what they’re doing when they really have no clue.


NewsMax reports the United States' trading partners are threatening to retaliate against President Donald Trump's plans for steep tariffs on steel and aluminum imports with sweeping tariffs of their own against American-made goods such as Harley-Davidson motorcycles and Kentucky bourbon.

Officials in Canada, China and the European Union are saying that if Trump follows through on his call for tariffs of 25 percent on steel and 10 percent on aluminum, they'll follow suit with their own tariffs that could fuel a trade war, reports The New York Times.

Here's the bottom line.  The United States is still by far the largest economy in the world.  Other courtiers want to sell here because no other place in the world can compensate for the buying power we have.  That's the strength of our country and Trump knows it.
at 3/03/2018 11:23:00 AM