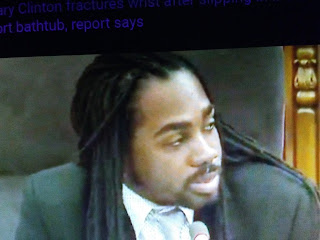 So does this mean Leftists having been lying to us all along?
It’s not too much Carbon-dioxide in the atmosphere.   It's those weather manipulating Rothschilds.  Who knew?

In an Instagram post, Democrat Trayon White apologized to "the Jewish Community and anyone I have offended."

White made the comments on a Facebook video which was shot Friday morning through the windshield of a car driving through downtown Washington during snowfall.

"Man, it just started snowing out of nowhere this morning, man," White said, according to The Washington Post. "Y'all better pay attention to this climate control, man, this climate manipulation."

"And that’s a model based off the Rothschilds controlling the climate to create natural disasters they can pay for to own the cities, man," he added. "Be careful."