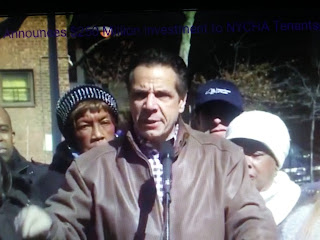 One of the basic fundamentals of Liberals is to show that you care.
That your heart is in the right place.  Unfortunately, that's all it is.  So when NY Gov. Andrew Cuomo made a big to do at a NYC housing project yesterday, his mission was accomplished.  Photos were taken and promises of big cash to fix NYCHA were made.

NY Daily News reports Gov. Cuomo said Saturday that he would push to free up $250 million in state funds to fix the deplorable conditions at the city’s public housing complexes.

The cash infusion, if approved, would come on top of the $300 million the state has already pledged for NYCHA repairs.

“Even though the state has no financial responsibility, I am going to fight for another $250 million for NYCHA residents because I want to say to this federal government and this city government — ‘It’s time to lead,’” Cuomo said.

Cuomo was HUD Secy under Bill Clinton from 1997 to 2001.  Many of the conditions that plague NYCHA existed right under his nose.  New York state has nothing to do with NYCHA.  So any promise Cuomo makes is nothing but naked politics.  He doesn’t have to come through with the money.  But, he does care…about the photos and video footage.  He wants to run for president ya' know.
at 3/18/2018 09:44:00 AM