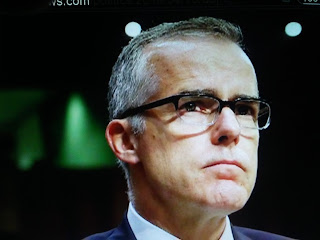 This report should have been released Monday morning instead of a Friday afternoon document dump.
So the government did McCabe a big favor.  Nonetheless, McCabe very much deserved to get fired.

Fox News reports Andrew McCabe, onetime acting FBI director, leaked a self-serving story to the press and later lied about it to his boss and federal investigators, prompting a stunning fall from grace that ended in his firing last month, says a bombshell report released Friday by the Justice Department's internal watchdog.
Inspector General Michael Horowitz, appointed by President Barack Obama, had been reviewing FBI and DOJ actions leading up to the 2016 presidential election.
The report, handed over to Congress on Friday and obtained by Fox News, looked at a leak to The Wall Street Journal about an FBI probe of the Clinton Foundation.
The report says that McCabe authorized the leak and then misled investigators about it, leaking in a way that did not fall under a "public interest" exception.