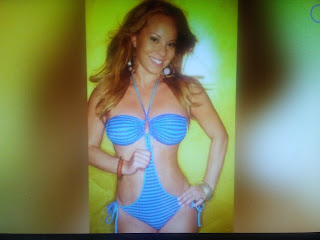 Jackpot!  That's what this shaky girl must be saying.  I bet Stormy Daniels is jealous.

NY Post reports that's a lot of singles!  An ex-stripper scored the six-figure inheritance left by an HBO executive she’d met just months before his death — beating back a challenge from his family, court records show

Bodacious bottle blonde Veronica Beckham, 34, said she became “friends” with the cable network’s obese IT director, Micky Liu, after meeting him at the Atlantic City Scores strip club in July 2014.

Less than a year later, Liu, 50, was found dead in his Manhattan apartment.
Her “everlasting friendship” with the diabetic, heart-diseased, chronic alcoholic is why, Beckham says, he named her the beneficiary of his retirement accounts and a life-insurance policy worth a combined $223,000.