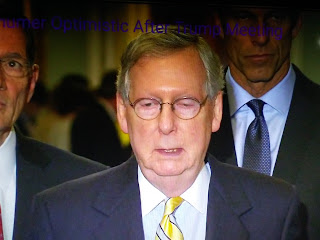 This bill was a gimmick from the beginning.
It's how politicians score cheap political points without facing any blow back.

AP reports Senate Majority Leader Mitch McConnell on Tuesday thwarted a bipartisan effort to protect special counsel Robert Mueller’s job, saying he will not hold a floor vote on the legislation even if it is approved next week in the Senate Judiciary Committee.

McConnell said the bill is unnecessary because President Donald Trump will not fire Mueller.
“We’ll not be having this on the floor of the Senate,” McConnell said on Fox News.

His comments came amid widespread opposition to the bill among members of his caucus, with several GOP senators saying the bill is unconstitutional. Others said it’s simply not good politics to try and tell Trump what to do, likening the legislation to “poking the bear.”

The bipartisan legislation was introduced last week as Trump publicly criticized Mueller, who is investigating potential ties between Russia and Trump’s 2016 campaign as well as possible obstruction of justice by the president. Trump, fuming about a raid of his personal lawyer’s office by a different division of the FBI, said last week that the Mueller investigation is “an attack on our country” and is “corrupt.”