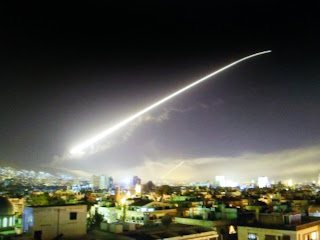 This bombing is justified because Syria's use of chemical weapons.
What happens next is up to Syria, Russia and Iran.  And I've said many times.  Iran is overdue for a ass kicking by the United States.

NY Post reports President Trump announced a military attack against Syrian President Bashar al-Assad on Friday, after the country allegedly perpetrated a chemical attack on its own people.

Trump told the nation from the White House that the US would join allies Britain and France in launching missile strikes in retaliation for the “evil and despicable” gassing of Syrian civilians.

“My fellow Americans, a short time ago I ordered the United States armed forces to launch precision strikes on targets associated with the chemical weapons capabilities of Syrian dictator Bashar al-Assad,” Trump said shortly after 9 p.m.