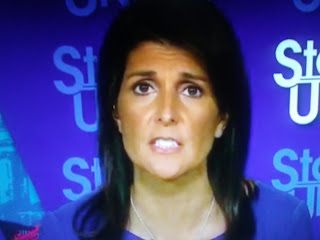 So it goes!  We'll see if Syria, Russia and Iran refrain from using chemical weapons.
It isn't like the civil war is being called off with conventional weapons that can kill plenty.

"The Security Council has failed in its duty to hold those who use chemical weapons to account," Haley said at a meeting of the U.N. Security Council that was called by Russia over Friday night's strikes. "That failure is largely due to Russian obstruction."

Moscow, China and Russia condemned the strikes on three of Syria's chemical weapons operations in or near Damascus by the U.S., France and Britain.

More than 100 missiles — double the number in last year's attack over Assad's use of sarin gas — hit the three targets, Pentagon officials said.
The Security Council rejected a Russian resolution calling for condemnation of the "aggression" by the Western allies.