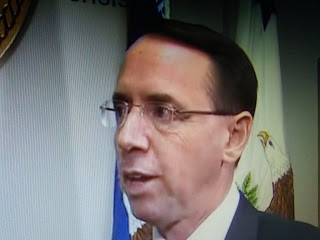 So if Trump is not a target of what's going on with Cohen, then Mueller has nothing on Trump still.
What the Hell is Mueller doing besides collecting paychecks with my money and fishing for a crime to justify it all?

Bloomberg reports Deputy Attorney General Rod Rosenstein told President Donald Trump last week that he isn’t a target of any part of Special Counsel Robert Mueller’s investigation or the probe into his longtime lawyer, Michael Cohen, according to several people familiar with the matter.

Rosenstein, who brought up the investigations himself, offered the assurance during a meeting with Trump at the White House last Thursday, a development that helped tamp down the president’s desire to remove Rosenstein or Mueller, the people said.

After the meeting, Trump told some of his closest advisers that it’s not the right time to remove either man since he’s not a target of the probes. One person said Trump doesn’t want to take any action that would drag out the investigation.