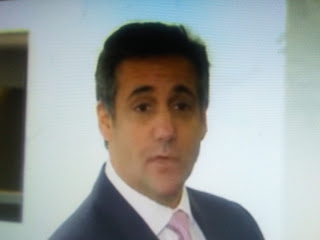 This is the advice that was given to Michael Cohen and President Trump from Professor Allen Dershovitz
as a strategy after Cohen's home and offices were raided by the FBI.

Daily Mail reports an attorney for President Donald Trump has told a federal judge that prosecutors should not get to study evidence seized from his personal lawyer until he has a chance to review the material and identify items that might be subject to attorney-client privilege.

Attorney Joanna Hendon filed papers late Sunday asking a federal judge to block prosecutors from studying the material until Trump's personal lawyer, Michael Cohen and the president have both had a chance to review it.

'Fairness and justice - as well as the appearance of fairness and justice - require that, before they are turned over to the Investigative Team, the seized materials relating to the President must be reviewed by the only person who is truly motivated to ensure that the privilege is properly invoked and applied: the privilege-holder himself, the President,' Hendon wrote.