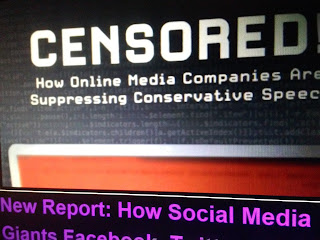 This needs to be made public and screamed from every mountain top.
Conservative thought must break through censorship walls.

CNS News reports a new report by the Media Research Center (MRC) documents how the major social media sites -- Facebook, Twitter, YouTube -- and the Google search engine suppress conservative speech in a "clear effort to censor the conservative worldview from the public conversation."

When asked about this censorship by Sen. Ted Cruz (R-Texas) on April 10, Facebook CEO Mark Zuckerberg testified that his company “and the tech industry are located in Silicon Valley, which is an extremely left-leaning place,” and added that he did not know whether content from liberal groups, such as Planned Parenthood and MoveOn.org, had ever been restricted on Facebook.

These multi-billion dollar online media companies, which reach more than 1.8 billion people worldwide, have declared war on the conservative movement, states the MRC report, and "conservatives are losing -- badly." If "the right doesn't fight," states the report, "it is doomed -- online and off. This is more than just a free speech battle. It is a struggle for the future of our nation and our world."