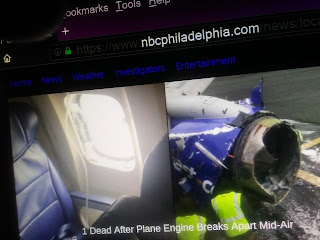 I can't imagine what this ordeal was like.  It's a miracle the plane wasn't lost.

NBC Philadelphia reports as a Southwest Airlines jet hurtled 32,000 feet over suburban Philadelphia, a rare engine explosion caused a passenger’s window to burst, partially pulling the woman sitting next to the opening out of the plane.

Fellow passengers frantically worked to yank her back inside the airliner as it depressurized and quickly descended thousands of feet per minute, according to several passengers.

The frightening ordeal played out Tuesday morning onboard Southwest flight 1380 as it headed for Dallas. The Boeing 737-700 was about 20 minutes into its journey from New York’s LaGuardia Airport when the engine failure occurred. The plane, carrying 144 passengers and five crew, diverted to Philadelphia International Airport where it made an emergency landing at 11:20 a.m.