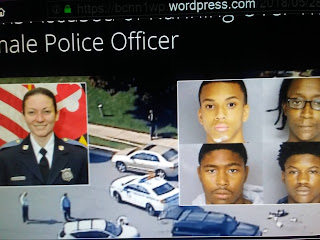 It looks like some black teens from Baltimore City decided to go on a crime spree
in Baltimore County and a female police officer got in the way and wound up getting killed.  Of course the spin from black activists will be quite different.

Miami Herald reports it's hard to think of a more volatile mix: Four young black males from Baltimore City, accused in the death of a white female police officer in Baltimore County. Authorities say three of the teenagers were breaking into homes when the fourth ran the officer over in a stolen Jeep.

"I was hoping they'd kill him during apprehension. What a waste of life. He's currently breathing air some decent person could be breathing."