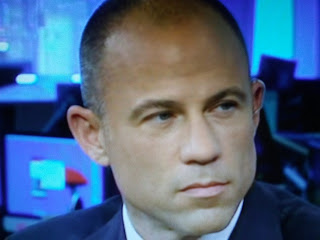 I like to know who is paying this guy because it ain't his hooker client collecting dollars on her G-string.

Fox News reports the U.S. Treasury wants to know how Stormy Daniels' lawyer, Michael Avenatti, obtained private banking records of longtime Trump counsel Michael Cohen.
The records show Cohen received hundreds of thousands of dollars from several companies, including one tied to a Russian oligarch, Martha MacCallum reported.
Cohen claimed the documents are inaccurate, when approached by the media while getting into his car.
George Washington University Law Professor Jonathan Turley said it's "hard to make out who's telling the truth here."
He said that some sources claim to have confirmed Avenatti's account that the records are legitimate.
But Turley warned that even if they are, including the one noting a connection to a Russian mogul, they aren't "strong evidence of Russian collusion."