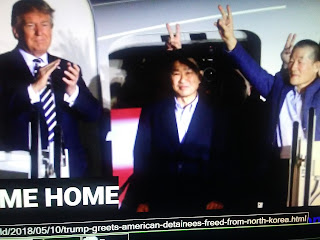 Tremendous!
Just wonderful that are citizens are free and back home thanks to the efforts of President Trump.


Fox News reports when three Americans newly freed from detention in North Korea arrived at Andrews Air Force Base in Maryland early Thursday, President Donald Trump was there to greet them.

The White House said earlier they would be evaluated and receive medical treatment at the Washington-area facility. Their families were not on hand for the ceremony.